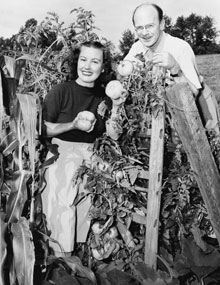 What is an allotment?

Allotments have been in existence for hundreds of years, with evidence pointing back to Anglo-Saxon times. But the system we recognise today has its roots in the Nineteenth Century, when land was given over to the labouring poor for the provision of food growing. This measure was desperately needed thanks to the rapid industrialisation of the country and the lack of a welfare state. In 1908 the Small Holdings and Allotments Act came into force, placing a duty on local authorities to provide sufficient allotments, according to demand. However it wasn’t until the end of the First World War that land was made available to all, primarily as a way of assisting returning service men (Land Settlement Facilities Act 1919) instead of just the labouring poor. The rights of allotment holders in England and Wales were strengthened through the Allotments Acts of 1922, but the most important change can be found in the Allotments Act of 1925 which established statutory allotments which local authorities could not sell off or covert without Ministerial consent, known as Section 8 Orders. In Scotland the Community Empowerment Act came in to force on 1 April 2018 and updates and simplifies legislation on allotments. It requires local authorities to maintain waiting lists and take reasonable steps to provide allotments if the waiting lists exceed certain trigger points. It also strengthens the protection for allotments and clarifies the rights of local authorities and plot holders. Provisions allow allotments to be 250 square metres in size or a different size that is to be agreed between the person requesting an allotment and the local authority. The Act also requires fair rents to be set and allows tenants to sell surplus produce grown on an allotment (other than with a view to making a profit). There is a requirement for local authorities to develop a food growing strategy for their area, including identifying land that may be used as allotment sites and identifying other areas of land that could be used by a community for the cultivation of vegetables, fruit, herbs or flowers.  in Northern Ireland councils can provide allotments but do not have a statutory duty to do so. Further legislation has been listed over the intervening years which have affected allotments, the latest of which is the Localism Act 2011.

As allotments are leased from landlords, allotment holders are required to pay rent. This money is used to cover the water rates and general maintenance bills. This rent can be anything from a peppercorn amount through to £100 a year per plot holder, but most are in the region of £25 -£125 each. Despite there being legal statutes relating to allotments, nowhere do they state how much rent should be charged or collected, instead general terminology is used, citing that the rent to should be a ‘reasonable amount’ which the ‘tenant would expect to pay’.

Allotment holders, and in turn the local allotment societies they form, are obliged to sign a tenancy agreement which outlines what is expected of them by the landlord. These agreements cover the rent due, the kind of activities which can take place on the land, the building of sheds, subletting issues, as well as the general behaviour of the plot holders. A Tenancy Agreement dating back to 1846 serving the Parish of Husbands Bosworth states “Every occupier is expected to attend divine service on Sundays; and any occupier who digs potatoes or otherwise works on his land on Sunday shall immediately forfeit the same.” Things have changed a little in the last 150 years, as Sunday’s are now the most popular gardening day of the week.