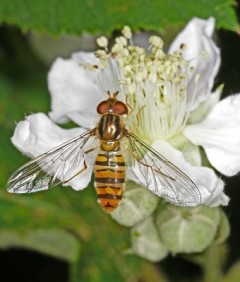 Bees and other pollinators

Insect pollinators of crops and wild plants are threatened by land-use intensification (including habitat destruction and pesticide use), the spread of pests and diseases and climate change. It is feared that two thirds of pollinators are in marked decline and that 25% are threatened with extinction. Six species of bumblebees have declined by 80% in the last 50 years and 2 species have become extinct since the beginning of this century; while the twentieth century saw the extinction of 4 British butterflies and 60 species of moth. The Urban Pollinator Project at Bristol University has produced a series of films about their research, click on the image below to view their allotment film.

Honeybees receive the most public attention it seems but the top estimate is that honeybees could provide 34% of total pollination service demands; other vital insects that pollinate our food-plants include moths, butterflies, flies and wasps as well as various other types of bees; all of whom have varied food and habitat requirements. The dependence on pollinators varies from crop to crop; from an allotment perspective, runner beans have an 85% dependence on pollinators, cucumbers 65% and top fruit – apples, pears and plums have between 65% and 85% dependence. The potential cost of compensating for pollination by insects, as has become necessary in parts of Japan, has been estimated at £1.8 billion. Click on the link to read more about allotment beekeeping

We, as allotment holders can play our part in current efforts to halt this decline; we can manage sites and plots so that they are not only productive but also pollinator friendly click here to read about wildlife friendly gardening.

We can also support strategic efforts to address this issue by government and other interested parties.