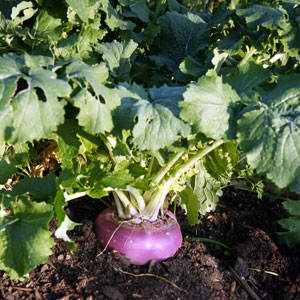 The turnip used to be one of the staple vegetables in the British diet until the popularity of the potato replaced it in the kitchen. Summer turnips must be grown quickly on fertile ground. Otherwise they will struggle to develop and either end up with a tough, fibrous texture or quickly run to seed. Like most members of the Brassica family they grow best in firm soil. Winter turnips can follow on from a previous crop preferably fitting into a crop rotation system.

Turnips are grown from seed. It is possible to transplant turnips but it better to sow the seed directly in the soil in rows where the plants will grow on to maturity. The main sowing season is during March and April avoid sowing turnip seed during the hot months of May and June.  The seed is sown thinly in drills 12mm / ½ ins deep with 30cms/ 12ins between the rows. The seeds of the later, hardier turnip cultivars are sown during July up until the end of August. The winter turnips can be pulled for use as required up until December but then they must be lifted and put into storage as described below.

When the first true leaves are produced thin the seedlings to 8cms / 3ins apart; the second and final thinning about two or three weeks later leaving 15-22cms / 6-9 ins between plants. Water along the rows of seedlings the day before and immediately after thinning them out.

Turnips must never go short of water at any time during their growing period. Always water well during dry spells including liquid seaweed in the watering can and hoe regularly between the plants to control the weeds and to produce a dust mulch.

Turnips can be harvested regularly all through the summer pulling them for use as soon as they are the size of a golf ball and before they reach they become as large as a tennis ball. The late summer turnips must be out of the soil by mid-October. Lift them using a garden fork shaking some of the soil off the roots and remove the foliage by twisting of the leaves. Use any damaged turnips first and only put healthy, disease free turnips into store. Store the turnips roots in boxes filled with sand or old potting compost.

Flea beetles are the main pest of turnips. They are mostly a problem to the young plants under dry soil and weather conditions. Water along the rows in the cool of the evening to create a moist atmosphere around the young plants.

Mildew can appear on the leaves towards the end of summer.

Turnips are brassicas and the danger of club root is always a problem. It is important to use crop rotations to prevent the possibility of an attack of the disease.