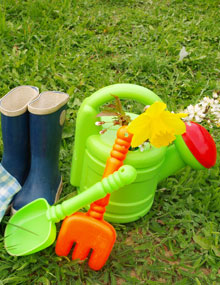 Below is a list of allotment related games and ideas to help entertain little ones and get them excited about gardening:

Adult: Your job is to be Captain of the ‘Jolly Rhubarb’ a pirate ship which sails the muddy seas. Under your command you have a gang of pirates whose job it is to hunt out treasure. Now this treasure is either buried under ground or hanging from bushes, but either way it is valuable and packed full of vitamins and minerals – and must be hunted out before the end of the ‘harvesting’ season. Give each of your pirates a list of treasure they must find within 30 minutes, (e.g. a bucket of potatoes, ten tomatoes, six carrots etc) and the one who completes the task wins a prize.
NB – Fancy dress isn’t compulsory but it does add to the fun of it.

Why not have a competition with your friends, to see who can grow the best fairytale vegetables, nursery rhyme fruit
or spot the characters mentioned in other children’s songs.

Give the birds on your allotment a helping hand by making them a lard bird feeder.

The Victorian’s were fascinated by the natural world, often sending their explorers to far away countries, to discover new species. So why not pretend to be an explorer and go on your own bug hunt. See if you can spot any of the following -