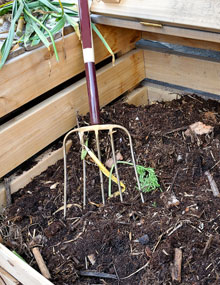 This page contains information on techniques which were well practiced some years ago but may have fallen out of favour. There is no ultimate right or wrong on which techniques to use – much of it is trial and error and gardener preference, but the list below will provide you with some ideas.

Double digging – this is a technique for digging over your allotment which was widely practiced a generation ago, and was once so common it formed part of the practical exams for horticulture students. It involves digging a trench two spades deep and bringing the bottom layer of soil to the top. The idea is that it will aerate the soil and help to break up big clumps. However there is also a school of thought which believes the practice serves little good, as the subsoil is often low in nutrients, meaning there is little benefit to your plants. These critics prefer a technique of digging just one spade’s depth and turning the soil as you go. If digging over winter, leave it roughly dug to allow the frost to help break up the clumps, before raking and forking in the Spring to a fine tilth, ready for planting.

On the other hand there is also the no-dig method. This idea rests on the notion that the roots of your plants will only go down around 20cm and so it is only the top level of the soil that needs work. (Plus it is thought that deep digging destroys the soil structure.) You will still need to dig the plot the very first time you get it, but not from then on. Instead lightly fork and rake over the top layer of soil before each planting season and add organic matter if needed. This method is perfect for raised beds.

Making your own compost accelerator – compost needs a mixture of moisture, carbon and nitrogen to produce a good rot, but in order to help the process along gardeners used to add a urine mix. One part urine should be combined with eight parts water and then poured on to your compost heap. Turn regularly and your homemade manure will be perfect!

Free plant food – another recipe for helping your plants is to create your own plant food by steeping nettles in water. The nutrients in the nettles are ideal for helping to feed young plants. Other recipes include boiling sheep’s manure; firstly to kill off any parasites before spreading it on the soil and secondly to create a liquid feed.

Liming your soil – gardeners used to add lime to their soil religiously every winter. Today however the practice has become more scientific with the advancement of soil testing kits. Lime is calcium rich, meaning that its addition to the soil will lower acidity and help plants to access nutrients found in the earth.

Crop rotation – this method of gardening should not be ignored or have fallen out of favour, as it is one of the main ways of ensuring your soil (the balance of nutrients) and crops stays healthy, especially if your plants have suffered from certain pests or diseases. Rotate on a three year cycle of brassicas followed by root vegetables followed by other vegetables including legumes. So for example in bed A, plant broccoli in year one, carrots in year two and then beans in year three.

Sowing straight into the soil – in years gone by gardeners always sowed straight into the soil; digging drills or trenches and then dropping in their seeds. This method was practiced mainly because people followed the seasons, the weather and didn’t have central heating. Whereas today we start our crops off indoors on a sunny window sill or heated greenhouse, at nearly any time of the year, gardeners of old waited for the frost to have safely passed before venturing outside in May.